Menu
Hiding behind the arid, sunny wind of the desert land is charming, wild beauty of the ancient Cham towers, with its architectural and sculptural fine arts. Cham towers, also known as Thap Cham, is a type of temple architecture Champa tower, religious architecture Cham ethnic Cham (also called Cham people, living in the South Central Today, it is possible to see the location of the temples that used to be the residence of the Champa people, furthermore the stupas that can be considered Champa towers in Cambodia such as Damray Krap. The Javanese or Khmer elements are also found on the Champa towers such as Khuong My, Hung Thanh, Duong Long, or even the Champa towers called “Khmer towers” such as Hoa Lai tower. The Cham towers are an architectural block built of dark red bricks from the local soil, with a broad and elongated flower shape. The majority of the towers are squares with narrow interior spaces, with the only opening to the east (towards the rising sun). The ceiling is composed of arches, in the heart of the tower put a stone altar god. The carved, elaborately carved flowers, birds, dances, divine expression on the outer wall of the tower. Brick joints are very solid, lasting for decades. On 1 October 2006, the Center for Management of Heritage-Heritage of Quang Nam officially announced the information: scientists of the University of Milan, Italy while working on restoration of the G-Class of the United States. Son was aware of the type of adhesive materials to build Champa tower a few million years ago. It is a refined colloid from a plant species that is abundant in the area around the My Son heritage, which locals call it the common oilseed. In addition, they have discovered a compound derived from native plants mentioned above in the brick used to build the tower. Thus, the mystery surrounding the material used by the Cham to build religious works in Vietnam after more than 100 years has been decoded. Previously, an artisan named Le Van Chinh (of Quang Nam province) spent a lot of time researching the method of building a Cham tower, which discovered ore compounds in brick to build towers and adhesives. In Cham, the Champa tower is called kalan, meaning “mausoleum”. These tombs were built by the Cham king to worship the gods. The gods that are worshiped may be typical Hindu gods like Siva, Ganesha, or even Buddha. This depends on the belief and respect of each king in different dynasties. At present, My Son is mainly a religious architecture worshiping the gods of Hinduism and Brahmanism. But in Dong Duong (the area of Thang Binh district, Quang Nam province) this is the largest Buddhist capital of Champa. In terms of architecture: the Champa towers are mostly on high hills or low mountains, built in clusters, eastward looking out to sea, the pagoda, Vietnam tower during the Ly, the Tran also often built on hills, hills and slopes, creating a whole population, south or south of the East, welcome oxygen. Vietnam Tower also rises with many floors such as Champa tower and square area near to the East, West, South, North. Champa tower as well as Ly – Tran tower is basically built of brick or add some stone components. There is a Champa Tower directly opaque on the brick after the building, while in the Ly – Tran tower, the decoration is printed, engraved directly on the brick, then later brought to the burned, where to decorate. that’s it. The most popular and interesting of the Champa art is the apsara, most of which are at the height of the 10th century Champa sculpture. Characters combining humans with birds or with mammals are found in both the Champa and the art. Vietnamese art. 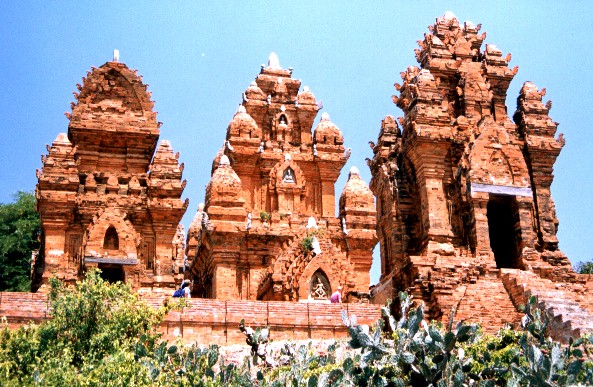